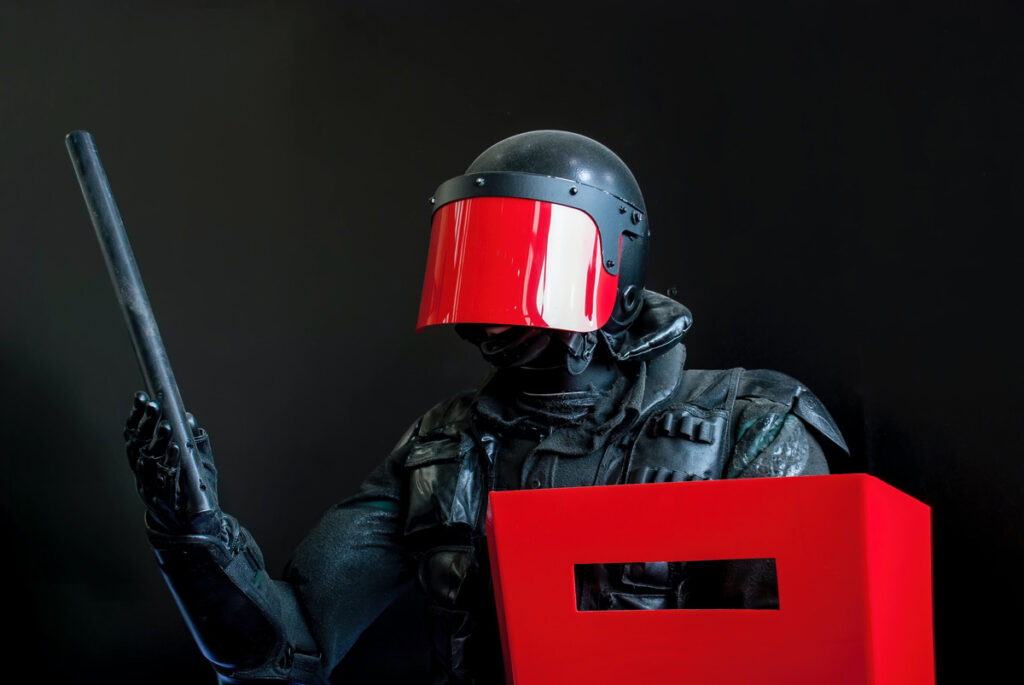 This is the sixth installment of the series, Protecting Protest: We Need All Hands on Deck, published in partnership with the Protect Dissent Network. Writers examine how the constitutional right to protest is being threatened and why we must fight to protect it. Analyzing what anti-protest legislation signals for the future of the country and our democracy, contributors address what we must do to defeat these attempts to repress our voices and reverse progress.

History has shown that powerful social movements generate serious backlash. This makes protecting protest all the more essential. Legislative and legal backlashes against two recent social movements illuminate this reality. The first is the coordinated backlash against the modern racial justice movement, which cohered around demands to end police brutality against Black people. The second backlash is a reaction to widespread protests against fossil fuel pipelines, especially the Indigenous Water Protector resistance against the Dakota Access Pipeline.

Today, due to such efforts 119 anti-protest bills have been introduced in 37 states; 11 of those states have enacted 16 anti-protest laws. Most of these bills restrict where demonstrations can occur and expand the definition of “riot” to make it easier to charge demonstrators with felonies. Their purpose is twofold: deter and punish.

Thanks to a patchwork of lobbying disclosures in states passing laws designed to inhibit social movements, we can see that the bulk of responsibility for anti-protest laws falls on two interest groups: police organizations and fossil fuel companies.

Trend One: Police Are Lobbying to Undermine Racial Justice Protests

Backlash to the Black Lives Matter movement (BLM) was in full effect before the world watched police officers kill George Floyd on May 25, 2020. Floyd is one of many Black people on a disturbingly long and incomplete list of individuals killed by law enforcement. This movement dates back, roughly, to 2009, when Oscar Grant was shot in the back, face down, by Oakland, CA, police, triggering persistent racial justice protests. Indeed, police consistently kill over a thousand people every year, and the data clearly shows this violence is disproportionately inflicted upon (often unarmed) Black and Brown people.

At least 23 states have passed various anti-protest laws since 2017, according to the International Center for Not-for-Profit Law(ICNL). This wave of legislative attacks only increased following outrage over George Floyd’s murder, even though the vast majority of BLM protests were peaceful.

From 2020 to 2021, police unions and law enforcement lobbyists supported anti-protest bills in at least 13 states. This year, 23 states have considered anti-protest legislation. While few states provide disclosure, four confirmed support from police, according to the Center for Media and Democracy’s Anti-Protest Lobby Tracker.* Frequent supporters include chapters of the Fraternal Order of Police (FOP) and affiliates of the National Sheriffs’ Association. These police organizations are spending time and money to limit our legal ability to speak out against police violence. Police organizations also donate hundreds of thousands of dollars to legislators sponsoring anti-protest bills, many of whom are affiliated with law enforcement. Instead of focusing on improving policing practices, such legislators have prioritized making it easier to arrest and imprison the people demanding an end to racist policing, raising obvious questions about which lawmakers are willing to hold police accountable.

In Ohio, several bills targeting racial justice protestors have advanced through at least one legislative house, each with the support of a litany of police groups, including the FOP and state sheriffs’ association. Of these bills, HB 109 is the most sweeping attempt to criminalize protest; if passed, it would arm police and prosecutors with vague definitions, empowering law enforcement to make more arrests and charge more felonies.

Ohio Families Unite for Political Action and Change has worked to oppose HB 109. Executive Director Emily Cole explains, “Oftentimes protests are the only opportunity for families who are victims of police brutality to demand accountability—rarely are these voices heard in a courtroom. Police groups lead the charge to silence protestors and criminalize the first amendment because they fear being held accountable for the trauma they inflict on our communities.”

Some laws that passed with support from police lobbyists include provisions encouraging vigilante violence, specifically immunity for drivers who hit protestors with vehicles. There is a lingering stench of white supremacist violence behind this phenomenon.

New examples of the trend are emerging. A driver was filmed ramming into pro-choice demonstrators as they crossed a crosswalk in Cedar Rapids, Iowa. A law that could be used to protect individuals who carry out such attacks was passed in Iowa last year with support from several police unions and lobbyists. It is unclear if police supported a hit and run immunity law in Oklahoma, where drivers have maimed protestors, but police supported a similar bill in Missouri and a law passed in Florida.

The Florida law, HB 1, was a top priority for Governor Ron DeSantis. Supported by law enforcement groups and a lobbyist with ties to companies that profit from incarcerating people, the law broadened the definition of “riot” and added penalties for crimes committed during riots. The governor signed the bill into law in April 2021, performatively flanked by uniformed police officers at the Polk County Sheriff’s Office.

DeSantis’ law was opposed by a wide array of racial justice and free speech advocates. The Black Collective said the law, which “does nothing more than silence dissent and criminalize peaceful protesters, will disproportionately censor, incarcerate, and kill Black Floridians simply exercising their constitutional rights, setting a dangerous precedent of criminalization and repression.” The collective’s board chair and co-founder, Francesca Menes, called the law “a direct response to our effective organizing, locally and across the nation, to reimagine public safety and value Black lives.”

The collective, Dream Defenders, Chainless Change, the NAACP, and other organizations challenged HB 1 in court. In their complaint, the organizations stated:

“The Act was also designed to advance one viewpoint over others: to support a traditional conception of law enforcement, with its attendant racist history, while criminalizing the viewpoint and message of those wishing to protest police misconduct and advocate for a different type of antiracist law enforcement approach.”

Ongoing litigation has blocked enforcement of the law, for now, because of an injunction granted by a federal judge. The judge noted that in the 1950s and 60s, Florida passed similar racist laws to criminalize the civil rights movement. The injunction is being appealed.

As racial justice advocates challenge the legality of BLM backlash bills, another anti-protest trend has spread through a growing number of states: criminalizing the people who are protecting their land and water from threats posed by oil and gas pipelines.

In 2016, Native tribes and Indigenous organizations engaged in an historic gathering near the Standing Rock Indian Reservation to oppose the construction of Energy Transfer’s Dakota Access Pipeline. These water protectors were infamously attacked by militarized police.

After 10 months, in February 2017, police forcibly disbanded the water protectors’ protest encampments. The pipeline began operating that May, in violation of the 1868 Fort Laramie Treaty. That year, North Dakota, South Dakota, and Oklahoma passed laws establishing felony offenses for nonviolent trespass and larger penalties for organizations affiliated with nonviolent trespassers.

Borrowing language from the laws passed in Oklahoma, the oil industry refined their anti-protest strategy in late 2017. Marathon Petroleum, Koch Industries, and ExxonMobil used a consortium of lobbyists, legislators, and the American Legislative Exchange Council (ALEC) to draft a model bill that would hyper-criminalize trespass of pipelines, chemical plants, and other designated “critical infrastructure.” Laws that closely mirrored ALEC’s template bill spread rapidly, passing so far in 17 states, Alabama being the most recent.

According to records compiled by Greenpeace, in some states, legislators sponsoring these bills had financial investments in fossil fuel companies.* This trend was rampant in Ohio: state Senate co-sponsors of SB 33 and its predecessor, SB 250, later disclosed they had investments in companies that lobbied for both bills, including Marathon Petroleum, Enbridge, ExxonMobil, and Energy Transfer. SB 33 became law in early 2021, potentially turning trespass of “critical infrastructure facilities” into a third-degree felony.

Individual people cannot generally compete with the political interests of multi-billion-dollar companies, so it is easy to feel disempowered when considering what can be done to address this concerning trend. It is important to know that most anti-protest bills have failed, thanks to the people and organizations that fought against them. There are many ways to support their efforts.

What Can Be Done?

First, we can educate ourselves and our communities. Exposing the financial and political motivations behind anti-protest bills can help us to mobilize against them. The references in this article contain a wealth of information that can be used to demand accountability at a local level. To learn the facts about police brutality, visit Campaign Zero’s interactive Police Violence Report, which provides incredible visuals to complement its Mapping Police Violence project. It is helpful to understand how police and government agencies often act in the interest of large corporations, including the oil companies advancing anti-protest laws.

We can also take concrete action. Defending Rights and Dissent has compiled a list of tools, or tactics, to help counter the spread of anti-protest legislation. (Think of each tactic not as a final product, but as a steppingstone for further opportunities.) They include direct outreach to elected officials, many of whom likely do not hear enough from constituents about prioritizing community wellbeing over the demands of corporate donors or police lobbying groups. Such outreach can be bolstered by submitting op-eds to local media outlets. Earned media can help build connections with like-minded people, motivate others to participate, and encourage local media to prioritize covering the issue.

Coordinating with others to boost your impact is important. I recommend getting involved with local efforts that are already underway. Local advocacy groups are always in need of more donors and volunteers. You do not need to know all the answers—community organizers can let you know how to be most helpful. If you are looking for local organizations to support, the Proteus Fund has a searchable list of grantees that work on issues including police accountability, racial justice, the right to protest, and promoting a functional democracy.

Finally, for white folks who aspire to be effective allies, it’s important to be considerate when deciding how to support efforts led by Black people and people of color. Those who live in the crosshairs of systemic racism and police brutality do not need further education on the matter. White people’s attempts to define priorities or seek emotional validation only obstructs the efforts of BIPOC communities to reform public safety practices. Check out the helpful material published by Showing Up for Racial Justice, the Dismantle Collective, and the Catalyst Project to learn more. Resisting reactionary movements and legislation is not something we finish and graduate from. It is a process of lifelong education.

*Disclosure: These are projects to which the author was contracted to contribute.

« Getting the Right People on Your Board
Owning Our Businesses, Owning Our Culture: Building Black Wealth in the Delta »