This article comes from the Summer 2021 edition of the Nonprofit Quarterly, “The World We Want: In Search of New Economic Paradigms.”

Early in 2020, the board of the U.S. Solidarity Economy Network (USSEN) called on like-minded organizations that were engaged in economic justice and systems change work to gather at a Resist and Build summit at the Highlander Research and Education Center in New Market, Tennessee. The center, founded in 1932, has played an outsized role as a movement-organizing space, known for helping to train labor organizers in the 1930s and civil rights organizers in the 1950s and 1960s.1

The call to action in the event invitation read: “This is a critical moment in history. We face multiple crises: environmental, growing social, economic and political divides, and a slide toward fascism, economic instability and war. There is an urgency to both resist these trends, and to build an alternative system for a just and sustainable future.”2

The goals of the gathering were three-fold:

This was prior to COVID-19 and spoke to long-term trends of wealth and income inequality that long preceded the pandemic, leading to increasing questioning of neoliberalism, as NPQ covered at length back in February 2020.3 These trends were publicly visible. Indeed, in late February, Bernie Sanders won a landslide victory in the Democratic Party’s caucuses in Nevada.4 Yes, soon Joe Biden would dominate the path to the Democratic nomination and, in November, win the presidency; but the world of early 2020 was one in which nominal prosperity was offset by increasing depths of despair, mounting student debt, and growing economic precarity.

This was the context in which the Resist and Build summit was called. But then came COVID-19, which not only dramatically altered the political and economic context but also made in-person events exceedingly difﬁcult to hold. The three-day solidarity economy summit was expected to be a small gathering that brought together leading national economy justice groups working on system change, including the U.S. Solidarity Economy Network, New Economy Coalition, The Democracy Collaborative, Climate Justice Alliance, Center for Economic Democracy, Common Future, Transition US, Green Eco-Socialist Network, and a smattering of local initiatives on the USSEN board. Scheduled for March 19–22, it was cancelled on March 13.

What emerged in its place, however, proved to be far more signiﬁcant. First, in lieu of the in-person conference, a series of two- to three-hour Zoom gatherings were held in March, April, May, and June. There have since been follow-on virtual gatherings, in October 2020 and March 2021, along with the development of an ongoing working-group system.

In the crucible of COVID-19, a stronger movement emerged.

The ﬁrst virtual Resist and Build gathering, held on March 20, 2020, had originally been envisioned as the ﬁrst full day of the in-person summit. A large part of the meeting was about participants and the different organizations in the virtual “room” getting to know each other better. This was also a time to introduce the framework that motivated the original summit in the ﬁrst place. The summit’s explicit purpose was to align building strategies (i.e., strategies that support the development of co-ops and myriad other forms of democratic, collectively owned initiatives) with resistance strategies (both community-organizing-based and electoral) and culture-building work. A Venn diagram was displayed that sought to illustrate the interconnections among the different efforts: 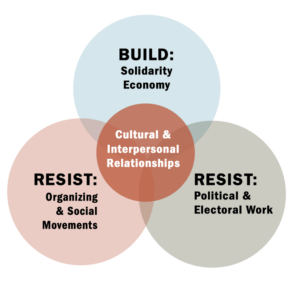 It’s worth recalling just how new the pandemic-induced shutdown was at that point. The previous day, the U.S. Department of Labor had issued its weekly report on new unemployment claims for the week ending March 14; the number of claims was a modest 281,000, only a 70,000person increase from the week before. A week later, that number would jump to 3.28 million.5

Even so, very early on in the pandemic, the need for mutual aid was evident. The challenge, noted one participant, was to move from a “charitable framework” to one rooted in principles of community self-care, solidarity, and support.

CONFRONTING THE CHALLENGES OF SYSTEM CHANGE

A month later, when the group reconvened on April 17, the initial shock of the shutdown had subsided somewhat, but the severity of the crisis had come into fuller view: 22 million Americans had received layoff notices in the intervening month.6 One conference organizer referred to the experience as “feeling a new normal of overwhelm.”

A central focus of the second gathering was to consider what is meant by economic system change and compare reformist progressive or “social democratic” policies with a more transformative, postcapitalist approach that reorganizes the entire economy along principles of solidarity, equity, participatory democracy, and sustainability.7

Participants were divided into four groups and were asked to imagine two alternative scenarios: one, a social democratic response, in which “a government following Keynesian/FDR/Bernie Sanders–type policies had been in power when the pandemic broke”; and another, in which the “capitalist structure itself had been replaced” by a solidarity economy model. Participants were asked to consider how each would have dealt with the pandemic differently from the actual U.S. policy response.

A central theme that emerged was that a social democratic/New Deal–type response that, for example, kept people on payroll, would have been better than, say, the chaotic rollout of the Paycheck Protection Program.8 But, as one participant noted, reformist efforts like the New Deal are “inherently unstable as long as capitalism is still the predominant economic system.” The reasons are not hard to discern. Indeed, U.S. history of the past few decades illustrates the ability of corporations to organize to cut regulatory controls and reduce their tax burden, undermining the ability of the public sector to ﬁnance social services.

At the same time, the challenges of developing a solidarity economy—not just as an idea but a living reality—were widely acknowledged. On the one hand, the crisis posed by the pandemic enabled people to “imagine things we couldn’t imagine and critique things we wouldn’t have critiqued before,” noted one participant. On the other hand, as another person cautioned, “Crises can always cut both ways. Yes, it opens space for radical imaginings, but it also can make people long for what was before. It will also rely on countless one-on-one organizing conversations. Crises are collective problems that require collective actions. The system that we live in is brilliant in guiding people into individualistic solutions to resolve tensions of the system.”

One conference organizer added, “A question we need to grapple with is that white supremacy predated capitalism and is a broader cultural and ideological container. How do we ensure our solidarity economy movement is also effectively undoing white supremacy patterns, systems, institutions, ideologies, etc., which are very much present?”

It was clear that there remained much work to do. As one participant noted, “We have a Next System Project,” referring to a program of the nonproﬁt The Democracy Collaborative that seeks to promote the study and discussion of economic alternatives. “We don’t have a next system movement. We need to build that.”

The third virtual gathering, held May 15, sought to lift up local organizing efforts in Massachusetts; Humboldt, California; and Jackson, Mississippi. In Massachusetts, Ariel Brooks of the Center for Economic Democracy9 and Emily Kawano of USSEN outlined how a statewide solidarity economy network was built in 2019 to buttress and connect local community land trust and cooperative organizing, and how that network had been mobilized during the pandemic to direct ﬁnancial support to mutual aid and solidarity economy groups.

In Humboldt, California, David Cobb of Cooperation Humboldt outlined some of the group’s efforts in Humboldt County, a community of 135,000.10 Among their efforts is an “honor tax” campaign that earmarks 1 percent of revenues for unrestricted funding for the native Wiyot nation, and support for a range of cooperative development initiatives.11 The group also participated in a 2018 campaign led by a local Latinx group that led to the passage of a countywide immigrant sanctuary resolution.12

In Jackson, Mississippi, Kali Akuno talked about the work of Cooperation Jackson, which launched in 2014.13 Akuno identiﬁed ﬁve focus areas of the group’s work: mutual aid, organizing the unemployed, co-ops, political education, and food sovereignty. Akuno also talked about the group’s efforts to engage in small-scale community production as a pathway to greater community economic self-sufﬁciency. “We think small-scale industrial capacity is important,” Akuno noted. He added that the goal is to “mix that in” with urban agriculture to “attain a level of food security and food sovereignty.” Amid the pandemic, Akuno added, mutual aid and developing solidarity economy supply chains were of the utmost importance.

The last of the monthly gatherings took place on June 19. In the intervening month, George Floyd had been murdered, and a global uprising against anti-Black racism had resulted. The central discussions at this gathering hinged on two key organizing questions: (1) What seems possible now that wasn’t there before?; and (2) How does it connect with the solidarity?

More broadly, to paraphrase Septima Poinsette Clarkwho, at Highlander, had led the development of citizenship schools to enable African Americans to vote during the civil rights movement—participants sought to be “weavers of threads” and identify areas of connection.14

A report back from a breakout group emphasized that the rise of Black Lives Matter offered a chance “to raise conversations around reparations and Black community wealth…the prison-industrial complex cannot be reformed, just like capitalism [cannot be]. That is a connection.”

Another participant added, “Defunding the police and the military-industrial complex are vital demands, because they help make possible the major transfer of resources needed for social transformation.… As we ask, ‘What are the police for?,’ the solidarity economy movement can provide some answers. The alternatives proposed are centered in values of ‘caring, mutuality, solidarity.’”

BUILDING FOR THE FUTURE

After June, the four-stage virtual conference had ended; but the network-building effort has expanded to include other organizations, both sectoral and local, working on systems change, and continues through working groups around the arts, education, mutual aid, narrative change, politics, and policy, among other themes. The different work groups have met twice: in October 2020, to hear from the Southern Movement Assembly and reconnect in regional breakout sessions, and in March 2021, to reﬂect on the new political environment shaped by the Biden administration (but also the January 6 insurrection at the Capitol). Most of the network-building work happens between meetings. (This edition of the Nonproﬁt Quarterly, for example, is one of the many products of the ongoing network-building work.)

In April 2021, the Resist and Build network, led by Cooperation Humboldt, convened the Post-Capitalism Conference. At one session, Nia Evans, who directs the Boston Ujima Project, spoke of the step-by-step work needed to build an economy rooted in racial and economic justice and solidarity.15 “We see our work,” Evans explained, “as providing as many opportunities as possible for people to practice everyday activities that would lead us to post-capitalism and a solidarity economy…we are actively building this every day. This is real. This is reality. We will win. We are winning in different ways every day.”