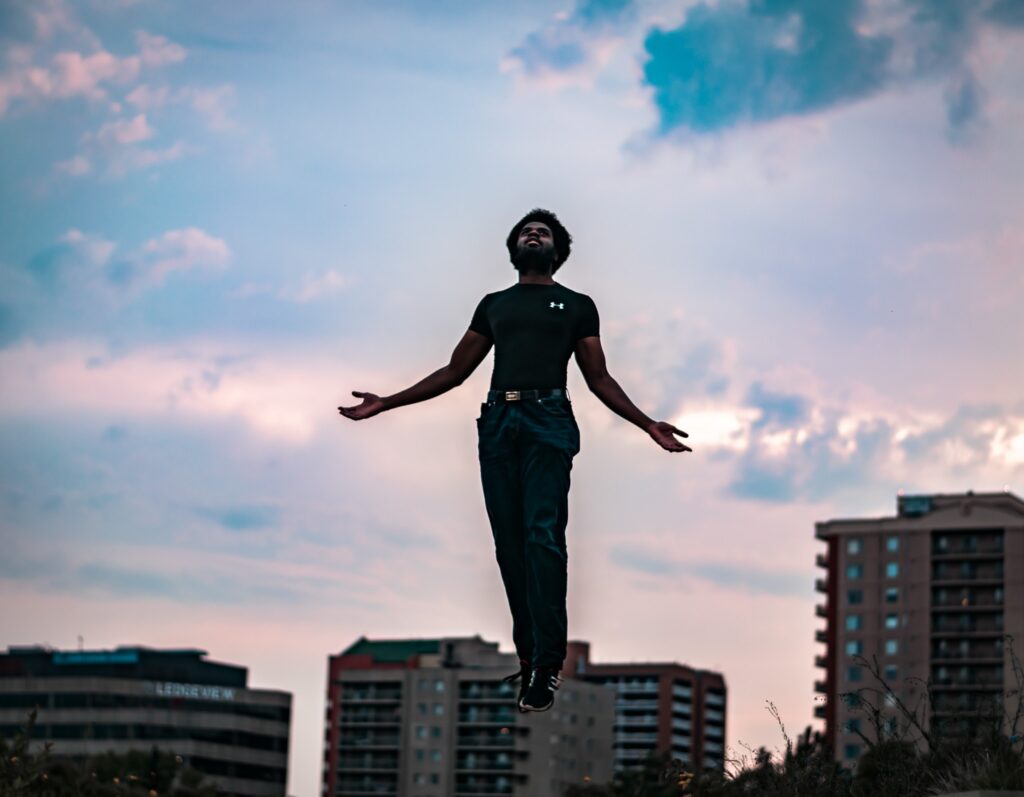 The nonprofit sector has a long, complex relationship with compensation. With a  workforce that in my home state of Minnesota is roughly three-quarters female and traditions of low wages these days, nonprofit workers are proving unwilling to accept second-class status. While the historical wage gap between nonprofit and those employed either by for-profit firms or the government is narrowing, nonprofits face mixed feelings from the public and funders about whether their employees deserve to earn wages comparable to business or government workers.

The process of getting nonprofits out of the proverbial church basement means overcoming antiquated views of the helping professions where your compensation includes “psychic income”—reflected in such tropes as doing the “Lord’s work” and rewards “in the next life.” These outworn views, too, relied on sexist stereotypes that the sector’s largely female workforce didn’t need or merit higher salaries.

Today, the public often reports positive feelings about the role and contributions of nonprofits but isn’t sure what to think about compensation. A public opinion survey conducted by the Charities Review Council in Minnesota presented four statements about how charity employees should get paid. The survey asked 800 people in Minnesota to pick a statement that best described their view of nonprofit pay:

These responses say a lot about the public’s conflicting conscious (and unconscious) attitudes toward nonprofit compensation, and are reflected by many in government, nonprofit boards, and funding organizations.

Gaining equitable federal treatment for the people who work at nonprofit organizations has been at least an 80-year slog, going back to the Social Security Act of 1935. Like farmworkers and domestic servants, work performed in the service of a charitable corporation, community chest, or foundation was excluded from the definition of “employment” under the Act. Indeed, nearly half of all women employed were excluded from protection in the initial Social Security Act, as were almost two-thirds of all Black workers, male and female. At the time, the NAACP protested the Social Security Act, describing it as “a sieve with holes just big enough for the majority of Negroes to fall through.”1

It took 50 years for nonprofit employees to be completely incorporated into the New Deal’s safety net reforms of old-age assistance and unemployment insurance. It was not until 19842 that mandatory coverage was extended to all nonprofit employees.

Lack of Congressional recognition of nonprofit employees as an authentic component of the US workforce nearly left them excluded from the Affordable Care Act in 2010.  Legislative staff admitted that they just didn’t think of nonprofit employers when drafting the legislation. In the end, when nonprofit employers were finally made eligible for the Act’s Small Business Health Care Tax Credit (for organizations with less than 25 employees), the credit was reduced to 35 percent junior status for nonprofits, down from the 50-percent credit given to for-profit businesses.

Perhaps a turning point for recognition of nonprofit employees as full-fledged members of the US workforce could be seen as taking place in 2020, with the adoption of the Paycheck Protection Program (better known as “PPP”). The PPP made nonprofit employers eligible for billions of dollars in forgivable loans on the same terms as businesses through the US Small Business Administration. For the first time, a significant federal economic measure included nonprofit employers on a par with for-profit employers.

This late blooming “coming of age” story for nonprofit compensation is still at a middle stage of development. Decades of gradually narrowing wage gaps between nonprofits and business and government employees have come as the nonprofit sector’s size, market share, and economic clout have increased. The below chart, which shows the extent of nonprofit employment nationally, draws on a 2020 report by the late Lester Salamon: 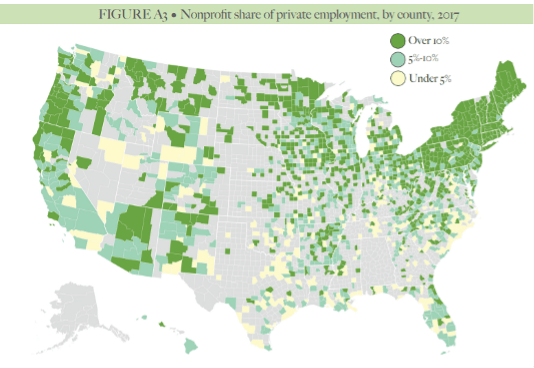 Wage Requirements:  Which Side Are Nonprofits On?

Nonprofit organizations have a stake in employment policies both as employers of over 12 million American workers (as of December 2021) and as historic advocates for reducing poverty. As the employers of considerable numbers of low-wage workers,3 often in small workplaces with severely limited resources (many with restricted government contracts), nonprofit managers and boards can feel wedged between social justice goals and budget constraints. The goal dissonance can be further exacerbated by resource dependency, especially if the nonprofit perceives that its funders or political allies would react negatively to their taking positions on economic justice issues like the minimum wage.

This nonprofit sector predicament is put under the spotlight each time legislation is proposed to mandate increases in wage rates, such as in the Raise the Wage Act of 2021. Congressional Democrats and President Joe Biden proposed a phased increase in the federal minimum wage as part of the American Rescue Plan, from $7.25 per hour4 to $15 by 2027,5 indexed to inflation.

Much of the debate between supporters and opponents of raising the federal minimum wage has focused on whether the most significant impact would be a reduction in poverty or a loss of low-wage jobs. To better understand the potential effect on nonprofits, and their reaction to the proposed increase, the Minnesota Council of Nonprofits surveyed organizations in the state in March 2021 to assess their level of support for the Raise the Wage Act:

Of surveyed nonprofits, 72 percent indicated that they believed nonprofits should support the increase. The survey also asked: “What would be the potential impacts of a federal plan to phase in a $15 minimum wage on your organization, including the impact on your business model for organizations for whom government reimbursement rates/funding is a significant funding stream?”

The open-ended responses to this question tended to reflect the broad support expressed by 72 percent of the respondents:

At the same time, many respondents did express concerns and described management challenges their organizations would face:

Impact of Minimum Wages at the State Level

As noted above, the federal government has set a record length of time—13 years—in not raising the minimum wage. In response to this lack of federal action, 30 states and 35 cities and counties have raised their own minimum wages above the federal floor. State policies range from $8.75 and $9.00 at the low end (West Virginia and Nebraska) to $14.25 and $14.49 at the top (Massachusetts and Washington state).

In 2012, Minnesota’s minimum wage was the subject of a “Raise the Wage” campaign supported by a broad coalition of labor, faith-based, and nonprofit organizations (including the Minnesota Council of Nonprofits that I directed). The legislature and governor ended up reaching agreement on an increase in the state minimum wage to $9.50 per hour, with a requirement for annual inflation adjustments—the District of Columbia and 18 other states also have this provision—with lower wages allowed for small employers.

Overall Minnesota nonprofit employment and wages have increased substantially each year since 2012, indicating that while many organizations were affected, the bulk of the nonprofit sector was able to successfully adjust to the higher rate. Most recently, Minnesota’s state minimum-wage rate increased on January 1, 2022, to $10.33 an hour for large employers ($500,000 or greater revenues) and $8.42 an hour for small employers (under $500,000 annual gross revenues). Minneapolis and St. Paul separately adopted ordinances with increases to $15 per hour by 2024 (Minneapolis) and 2025 (St. Paul).

The nonprofit sector encompasses a very broad range of organizations with a multitude of missions. Often high ideals come into conflict with practical goals (and fundraising). Thousands of organizations, millions of employees, and billions of dollars are held together by a tax status and mission dreams that never die.

Across the landscape of policy and advocacy organizations, infrastructure associations, foundations, and a growing set of unionized nonprofit workforces lives a noisy division of political labor. While an important set of advocates promote higher minimum wages, most nonprofits remain firmly on the sideline.

One result of this reticence: advocates’ visions of a mobilized nonprofit coalition acting on its stated economic justice values to act as a countervailing force to powerful business lobbies has never quite come together. While there are exceptions, particularly among organizations that have strong representation and leadership from people of color, many nonprofit industry associations continue to have small scope agendas. They often limit their attention to defending their tax exemptions, access to government funding, charitable giving incentives, and seeking better public recognition. This is a result, at least in part, of nonprofit resource dependency and deference to foundations, too many of whom still react negatively to economic justice measures such as ones that might set the minimum wage at a level that truly provides for a livable wage.

The Cost of Inaction

It is relatively easy to show that, despite the fears, nonprofits really can maintain their services while paying higher wages—particularly if higher wages are mandated for the entire economy (which of course means that for-profit competitors must pay higher wages too).

Indeed, the same is true for employment more broadly. An ironic effect of the nation having low and stagnant federal minimum wage floors is that it encourages states and localities to set their own levels. As some economists have noted, over the decades this has created multiple natural experiments where one can compare bordering states and see if raising the minimum wage in one of them leads to a shift in jobs to the state with the lower minimum wage level. The data is pretty conclusive on that: it does not.

But something deeper is at stake here than minimum wage advocacy, and that is whether there is a nonprofit economic voice distinct from private business. Or—to the contrary—are nonprofits just another industrial sector like computers or fast food? One leading nonprofit academic voice, Lester Salamon, (who sadly passed away this past August), called the institute at Johns Hopkins that he created and led the “Center for Civil Society Studies” because he believed that nonprofits had a unique role to play in developing civic and social values and meaning—what he referred to as the “invisible subcontinent on the social landscape.”

Today, the nonprofit sector has grown up and is much larger in terms of employment share and share of gross domestic product (GDP) than in its early days. But as nonprofits have matured as businesses and gained increasing federal recognition for their economic role, there has not been a similar maturation of their social role. Indeed, the past few decades of neoliberalism—a period in which nonprofits have thrived—have run counter to economic and racial justice. The struggle within the nonprofit sector over whether and how actively to support higher minimum wages is a harbinger of a much more profound struggle—the struggle for the sector to identify its civil society voice on the role of government, the functioning of the economy, and even its own view of human nature.