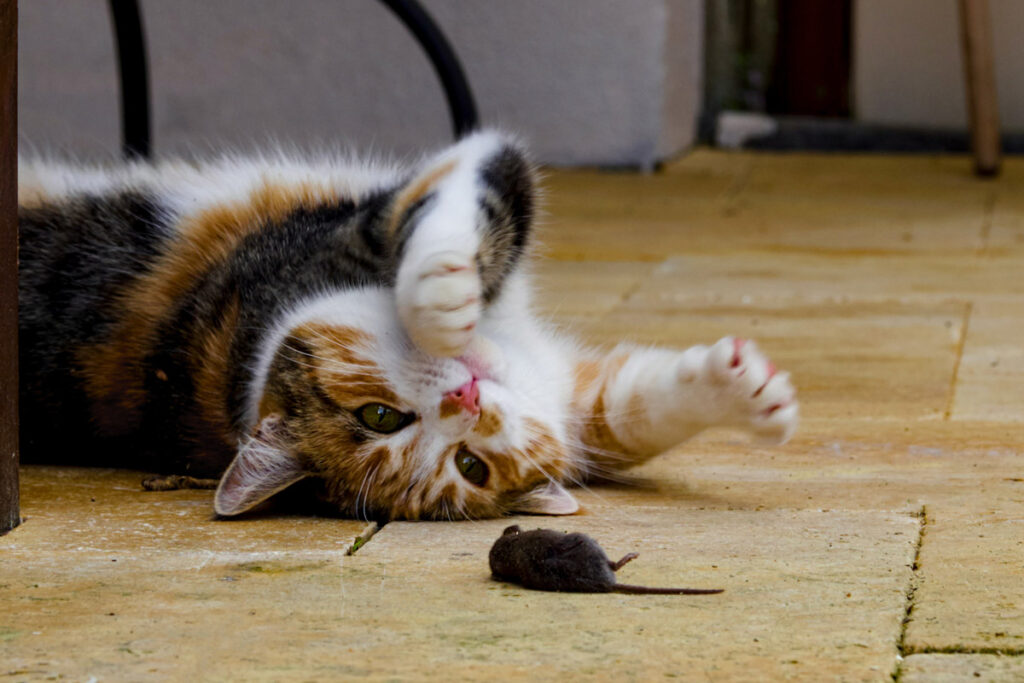 Growing income and wealth inequality are disrupting every aspect of US society, including donations to nonprofits. Since 2016, with our biennial report, Gilded Giving, we’ve been tracking the risks that increasingly top-heavy philanthropy poses to independent nonprofits—and to our democratic institutions. This article highlights some of the latest research in our recently released 2022 edition.

The problem in a nutshell is that nonprofits are receiving less money from donors at lower- and middle-income levels, making them increasingly dependent on major gifts from far smaller numbers of wealthy donors. Splashy mega-gifts from the ultra-wealthy have masked the troubling declines in small donor giving, which we attribute to rising economic insecurity for most households.

As wealth has concentrated in fewer hands, so has philanthropic power—the power to define not only which problems need fixing but also the universe of acceptable remedies.

The Changing Picture of Who Gives

Again, the big-picture story of the last two decades is that giving by regular Americans has been relentlessly declining, even as giving by the wealthy has increased.

First, the decline in giving from middle-income households: from 2000 to 2018, the most recent data available, the proportion of households giving to nonprofits has dropped from 66 percent to just under 50 percent—meaning that fewer than half of all US households now donate to nonprofits each year. This decline correlates with measures of economic insecurity and is likely a product of less stable employment, coupled with stagnant wages and homeownership rates.

Writing three years ago for NPQ, Shena Ashley, then Vice President of Nonprofits and Philanthropy at the Urban Institute, raised the alarm regarding the significance of this development. “What happens when the normative commitment to charity through charitable organizations is no longer universally held—when tens of millions of Americans choose to stop giving to charitable organizations?” Ashley asked. She concluded her analysis by noting that “foundations cannot remain comfortably unaware while everyday donors are walking away from charitable organizations.”

The other part of the big-picture story is that, at the same time, the share of charitable donations coming from the wealthy has increased significantly. In the early 1990s, households earning over $200,000 made up less than 25 percent of all charitable deductions. By 2019, they made up a whopping 67 percent. Some of this is due to an increase in the standard deduction in 2018, which limited how many people benefit from itemizing deductions. But even in 2017, before the tax law change, 55 percent of all charitable deductions were taken by families making $200,000 or more. For families making more than a million dollars a year, the percent of charitable deductions went from 10 percent in 1993 to 32 percent as of 2017—and even higher, 40 percent, with the new tax math in 2019.

And giving by megadonors—those at the very top of the income ladder—has grown astronomically fast. Giving USA‘s mega-gift threshold, which is the amount large enough to require a manual adjustment to their estimate models, has been increasing rapidly as ultra-wealthy donors dole out ever greater gifts. In 2011, the mega-gift threshold was just $30 million, and gifts over that size totaled $2.7 billion. By 2021, just 10 years later, the mega-gift threshold had jumped to $450 million, and gifts over that size added up to $14.9 billion.

But why does this matter? A century ago, in a 1926 short story, author F. Scott Fitzgerald famously reminded readers that the very rich are “different than you and me.” One implication of Fitzgerald’s wisdom for the nonprofit sector is that they also give differently than you and me.

Above all else, the wealthy prefer to give not directly to nonprofits, but to intermediaries—particularly their own private foundations and donor-advised funds, or DAFs. Of the $25 billion that America’s top 50 philanthropists gave to charity in 2021, for example, a full 69 percent of it—more than $17 billion—went to private foundations. The second-largest slice, another $2.6 billion, went to DAFs.

You can see the effects of this shift over time. For example, according to the Federal Reserve, private foundations at the end of the first quarter of 2022 had $1.326 trillion in assets. When the Federal Reserve’s economic time series began in the fourth quarter of 1987, that number was $101.2 billion. In current dollars, that’s roughly $260.4 billion. In short, even adjusting for inflation, the asset value of private foundations has increased by a factor of five over the past 35 years.

To illustrate this gap, in our latest edition of Gilded Giving, we compared the giving of the Chronicle of Philanthropy’s top 50 US donors to the giving of all Americans as reported in Giving USA. See the chart below to understand the vast difference in donor behavior: 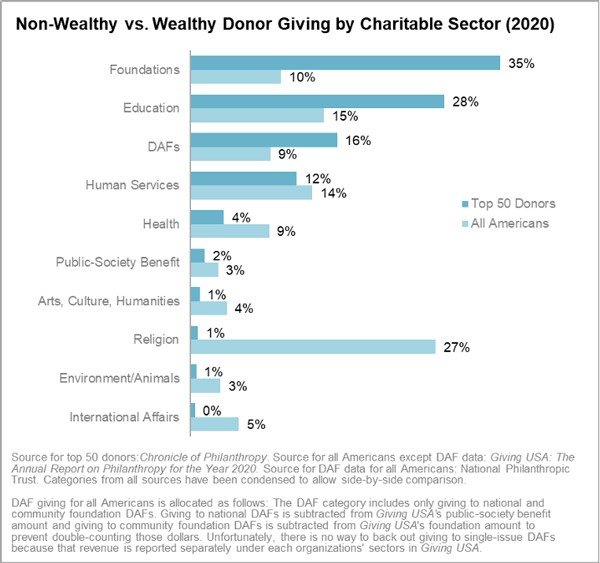 As a society, we are coping with a myriad of crises of enormous scale: pandemic, climate change, crumbling infrastructure, gaping social and economic inequities.

What do the choices of the top 50 donors tell us? More than half of their giving went to intermediaries—DAFs and foundations—rather than direct beneficiaries. Nearly eight dollars in 10 went to foundations, DAFs, and education. Has philanthropy met the moment? The data suggest that most elite resources fail to meet society’s most pressing needs.

The Rise of Intermediaries

Private foundations and DAFs offer significant tax advantages to the wealthy donors who contribute to them. But foundations are only required to distribute five percent of their assets each year to charity, and DAFs have no payout requirement whatsoever. To compound the problem, foundations can count both grants to DAFs and administrative expenses toward their annual payout.

All of this means that of the millions in taxpayer-subsidized contributions pouring into foundations and DAFs, very little is guaranteed to make its way out in a timely fashion to nonprofits working directly for the public benefit.

Because of wealthy donors’ giving, donor-advised funds have been the fastest-growing recipients of charitable donations in the US for the past 20 years. The largest single recipient of charitable giving in the US for the past six years has been the Fidelity Charitable Gift Fund—a commercial DAF sponsor. For the past three years, six of the top 10 charities have been DAF sponsors. And in 2020, for the first time ever, DAFs caught up with private foundations in terms of total contributions; both types of charitable intermediaries received roughly $48 billion from donors that year.

Yes, a considerable part of this money does eventually make it to nonprofits, but not enough. In 2020, a record year for DAF contributions to nonprofits, DAF donations to nonprofits totaled $34.67 billion. Foundations contributed in 2020 a record $88.55 billion. Even so, in 2020, assets of both DAFs and foundations increased—in other words, even in a record giving year, they are not able to donate assets as fast as they accumulate them.

As we have written previously in NPQ, we need to overhaul the rules governing philanthropy to discourage the warehousing of charitable wealth, to align tax deductions with the public interest, and to encourage broad-based giving across all segments of society. We outline our suggestions for this in detail in Gilded Giving 2022, but some of our key recommendations include:

We estimate in Gilded Giving 2022 that if foundations had a 10 percent minimum payout and DAFs had a three-year mandated payout between 2018 and 2020, at least $193 billion in additional donations would have flowed to nonprofits.

Reforms to philanthropy are important, but even more important is to restore a modicum of fairness to taxation. A 2021 ProPublica exposé revealed that many of the wealthiest people in our country have been able to use various tax-avoidance strategies to bring their effective tax rates down to just a “tiny fraction” of the millions of dollars that their assets grow each year.

There are many ways to evade taxation, and undoubtedly, one of those ways is through philanthropy, including the use of private foundations and donor-advised funds. And when millionaires and billionaires donate unlimited amounts of money to charity, they opt out of paying their fair share of taxes to support the public infrastructure we all depend on.

It is important to remember that philanthropy is not a substitute for democratically governed public investments paid for by a fair and adequate tax system. If the COVID-19 pandemic taught us nothing else, it should have taught us this. The New York Times estimates that the US government spent $5 trillion on COVID relief. That’s a decade’s worth of philanthropic giving.

Philanthropy does many things well—notably, it can test new approaches to advance social justice that may eventually lead to better government policies. Yet that’s only likely to happen if the philanthropic edifice has at least some mooring in the desires of communities. As we have seen, everyday citizens over the past two decades have lost a good deal of the modest influence that they once had on the nation’s philanthropic system. In a polity that aspires to be a democracy, movement actors and policymakers must join to rein in abuses, restore fair taxation, and establish basic standards of public accountability.